On Demand Machinery / About 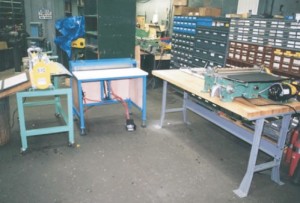 ODM started with a simple hand Casemaking Line that consisted of a Stomper Turning In machine, a Slider Case gauge combined with a Potdevin Gluer and a Rotary Press.

With the advent of on demand printing technology the book publishing business model would be forever changed, and in May of 1997 ODM took the initiative. We decided to introduce a complete line of hard cover equipment.

The 1997 On Demand Digital Printing and Publishing show would be the ideal place to introduce our new line of equipment. After many sleepless nights and long hours, we completed the first set up of machinery just a few hours before the show opened. 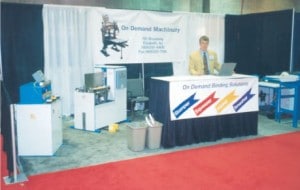 At the show, we met many representatives from the Xerox Corporation who provided great insight to the on demand marketplace and offered many words of encouragement that led us to continue our efforts. After the show, we formed a new company called On Demand Machinery that would become our marketing vehicle for the new ODM line of on demand hard cover bookbinding machinery.

As each year passed, the on demand printing market would continue to evolve and companies such as Lightning Source and MyPublisher® would emerge as leaders in the on demand book business and many would follow their lead. 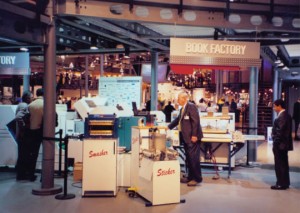 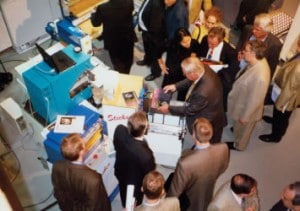 On Demand Machinery goes global exhibiting at drupa 2000 with ODM’s Casemaking, Sticker™ and Smasher™ machines. John Sr. demonstrates how easy and economical it is to produce hard cover books on demand. The ODM slogan was born… Bookbinding Made Simple! 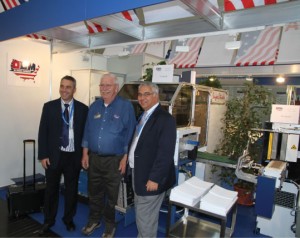 John Jacobson Sr. with customers at drupa 2012 Dusseldorf, Germany – May 2012 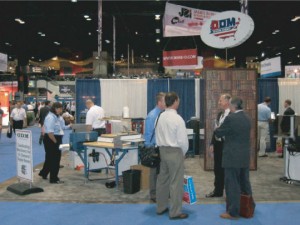 We have continued to expand our product line of new machinery and in the year 2006, ODM new equipment sales were 90% of overall sales. The huge growth in the on demand book market and the emerging photo book segment of this industry has generated a tremendous amount of business. ODM machines have significantly become more technologically advanced, without straying from our original premise of keeping ODM machines simple and backing them with the best customer service and tech support in the industry… and this will never change!

© 2020 On Demand Machinery, LLC | Designed by Verdi Productions
Back to Top